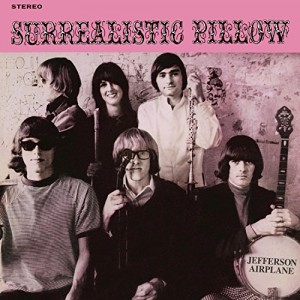 Preceded by: Jefferson Airplane Takes Off (1966)

It must have been like eight years ago or something that I heard the thrilling intro of ‘White Rabbit’ for the first time, on some New Year’s Eve. Some seconds later the enchanting voice of Grace Slick kicked in and I knew I had to get the album this was on. ‘White Rabbit’ remained one of my all time rock favorites year after year till now, and year by year my appreciation for the other songs on the album grew. Our next great album from the magical year 1967 is Jefferson Airplane’s  Surrealistic Pillow.

Jefferson Airplane was the only band that played on all three of the notorious hippie festivals in the late sixties. This was not only because of the good looks of Grace Slick on stage, but above all because the band was a true pioneer of psychedelic rock. This genre at his turn played a key role in the evolution of rock history. Before the emerging of psychedelic rock, most rock bands were folk and blues orientated. With it’s new techniques and effects it completely turned the rock scene upside down in the late sixties, paving the way for progressive and hard rock bands. Psychedelic rock derived from a psychedelic subculture, with people like Allen Ginsberg, Timothy Leary and Aldous Huxley preaching the expansion of consciousness and popularising the use of psychedelic drugs. It found its way into music first through The Byrds in the US and reached its peak in 1967, when it reigned the music scene all over the world. In the UK, The Beatles released Sgt. Pepper’s Lonely Hearts Club Band and Magical Mystery Tour, Pink Floyd had there album debut with Piper At The Gates Of Dawn and Cream showed the world Disraeli Gears. Meanwhile, Surrealistic Pillow was the defining album in the US.

The band had its roots in the flourishing San Francisco music scene of the mid sixties, where vocalist Marty Balin met fellow folk musicians and guitar players Paul Kantner and Jorma Kaukonen. Influenced by The Beatles and The Byrds, they transformed to a folk rock band with some other temporary band members. Performing in this music scene, they were often supported by fellow folk rock band The Great Society, which featured the female lead singer Grace Slick. Airplane, after releasing their folk rock debut album, was at that very moment transforming into a psychedelic rock band, and Grace Slick’s voice was just the ingredient they needed to make this transformation a big success. This big success was Surrealistic Pillow.

Talked enough, let’s see what’s on it. First of all those two monster hits, ‘White Rabbit’ and ‘Somebody To Love’, two songs Grace Slick brought with her. The first one was written by herself, the second by her brother in law and they are both absolute rock classics. ‘White Rabbit’ starts with an awesome bassline, closely followed by the marching drums. Then Grace slides in with the most psychedelic rock prayer ever, taking you to the fantasy world of Lewis Caroll. This is a landmark in its genre, but also one of those true classics that will NEVER bore me. ‘Somebody To Love’ is a much more catchier song, also supporting on the great voice of Slick, especially during the verses.

You can also still hear the roots of this band on several songs, which are a mixture of folk rock and British Invasion influences. A real folk rock gem for example is ‘Today’, a ballad with a very ‘foggy’ intro. But the beauty of the song is the combination of the vocal harmonies between Balin & Slick and the sweet guitar riff that was actually played by Jerry Garcia. The song basically fades into ‘Comin’ Back to Me’, which intro somehow reminds me of ‘Stairway to Heaven’. Another beauty is ‘D.C.B.A.-25’, with a typical Byrds sound (listen to that typical lead guitar and tambourines) and a fantastic canon between Balin and Slick. The British Invasion sounds can be heard on ‘My Best Friend’ (with some Westcoast breeze) and ‘How Do You Feel’, which could actually be The Moody Blues when you leave the tambourine out.

The real psychedelic rock sound is to be found for example on opening track ‘She Has Funny Cars’. It has a delicious jazzy drum intro, followed by a variation of vocal harmonies (verses) and dialogue (chorus), and that typical distorted guitar sound. Also in this categorie are ‘Plastic Fantastic Lover’ (sounding like their psychedelic colleagues of 13th Floor Elevators, nice solo in the end) and ‘3/5 of a Mile in 10 seconds’. This one has bouncing guitars from the start and the combination with the fast drums make this the loudest song on the album and a personal favorite. Talking about favorites, there’s one song that doesn’t fit in any of the previous categories: ‘Embryonic Journey’. Waking up never felt better since I set this song as my alarm clock tone, they should play this instrumental acoustic one in every elevator.

Airplane would release some more psychedelic rock albums in the years following, till the genre died in the early seventies. Pink Floyd’s Syd Barett had gone crazy, Brian Wilson got depressed, The Beatles and Cream broke up and Janis Joplin, Jim Morrison and Jimi Hendrix died. Luckily for us, the music is still there and this album is a perfect starting point for discovering psychedelic rock. It’s the variation between psychedelic shots like ‘3/5 of a Mile in 10 seconds’ and fascinating ballads like ‘Today’: this album launches you eight miles high before letting you land peacefully again, right on your surrealistic pillow.