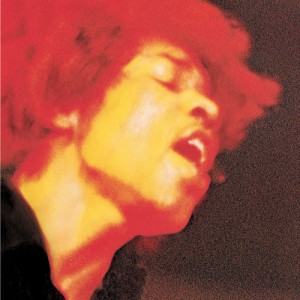 Let’s have another walk through the treasure chamber of 1967. Pete Townshend and Jeff Beck were turning guitar players into absolute stars and Clapton was God. But suddenly a black American lands in the UK and asks the white rock scene: Are You Experienced ?

As you know, 1967 can not be seen apart from the uprising of psychedelic rock. Existing blues and folk rock bands began to use new techniques and effects which would later cause the establishment of prog and hard rock. Jimi Hendrix himself can be seen as one of the most important pioneers of this latter genre. Originally being a blues rocker, he incorporated those psychedelic elements to transform his original style to pure hard rock. That’s exactly what makes Are You Experienced such an incredible debut album, containing not only Hendrix’ blues roots, but also psychedelic effects he mastered perfectly thanks to his extreme talent as a guitar player, and the origins of hard rock.

Hendrix (as a guitarist) supported some acts like Little Richard during the mid sixties in the USA, before former Animals bass player Chas Chandler heard Hendrix perform the classic American song ‘Hey Joe’. Chandler soon became his manager and brought him to the UK, for Hendrix being the promised land as it was the native country of The Yardbirds, a band Hendrix greatly admired. Together with Hendrix, the different members of this band would later define the new genre of hard rock, as they were soon to form pioneer bands like Cream (Eric Clapton), The Jeff Beck Group (Jeff Beck) and Led Zeppelin (Jimmy Page). So Chandler would arrange a so-called ‘power trio’ (just like Cream) for Hendrix, which formed in October 1966 and consisted besides Hendrix of former jazz drummer Mitch Mitchell and  former guitarist Noel Redding, who would from now on play the bass, obviously.

In June 1969 the band would already break up again, after growing tensions between Hendrix and Redding. But during those three years the band released a magnificent trilogy of albums, being Are You Experienced (1967) – Axis: Bold as Love (1967) – Electric Ladyland (1968), all three of them ranked within the top 100 of ‘Rolling Stone’s 500 Greatest Albums of All Time’. A little more tragic thing about the band is that they were all found dead in their homes or some hotel room. For Hendrix of course this already happened in 1970, Redding was found dead in 2003 and Mitchell was the last man standing after passing away in 2008.

Back to 1967, when their debut was released after already launching three singles: besides ‘Hey Joe’, these were ‘Purple Haze’ and ‘The Wind Cries Mary’. This must have contributed to the success of the album (with the singles excluded, opposite to the US version, where some original album tracks like ‘Red House’ were replaced by the singles instead), reaching #2 in the UK behind Sgt. Pepper’s and staying there for 8 months. Let’s have a look at the 11 original tracks.

Like I said there’s blues rock, psychedelic rock and hard rock on this album. Far out the most bluesy song is ‘Red House’, which sounds like the early blues of Robert Johnson, intensified by Hendrix’ guitar. The song was already written by Hendrix before he joined The Experience, and has this typical blues theme of the singer which is left alone by his woman. The same goes in fact for the track ‘Remember’, the other blues rock song on the  album.

Best represented is psychedelic rock, making this the most psychedelic Hendrix album. First there are the shorter ‘3 minutes’ songs, with ‘Can You See Me’ (with a noteworthy role for drummer Mitch Mitchell), ‘May This Be Love’ (sounding a little bit like Cream, with a very dreamy voice of Hendrix) and ‘Love or Confusion’. This last one is a personal favorite, with the Airplane-like distorted sounds and the delicious guitar licks and powerful voice of Hendrix. Towards the end of the album are two longer psychedelic masterpieces. ‘Third Stone from the Sun’ (the title referring to earth) is mostly an instrumental one with lots of guitar effects and Hendrix talking like some character from Star Trek. If you play this track on the LP at single speed (45 RPM), you can actually hear what’s been said. The last track on the album, also the title track, is probably my favorite. Supported by his screaming guitar, Jimi invites us on a journey, making this song a true hippie-anthem (with lyrical similarities to The Doors’ ‘Break on Through’, from their own debut album of 1967).

What’s left are those riff-based, real hard rock songs that really turned the music scene upside down. First of all the opening track, the well-known ‘Foxy Lady’. Drifted by the catchy guitar riff and the pounding drum and bass section, this is a perfect start for an album. It’s still covered now and then during live gigs by Paul McCartney, who was a big fan of Hendrix. It’s followed by ‘Manic Depression’, another very Cream-like song with a couple of nice drum solos. Alltogether, this sounds like a stormy kind of waltz, and is supposed to be ‘about a cat wishing he could make love to music’, awesome song. ‘I Don’t Live Today’ is another sweet riff-based song, referring to the chaotic life of Hendrix.

The last song left is ‘Fire’, which really shows the capacity of the total band, not Hendrix alone. For me, the label ‘power trio’ is justified best on this song: it begins with a mighty drumintro and a minimal guitar riff, before exploding into an uptempo hard rock classic, propelled by a schizophrenic drum beat and a very catchy bass line from Redding. No surprise the group often opened their live gigs with this song. It’s a pity we won’t be able to witness those powertrips anymore, but you can make up for it by having this album in your record collection.

Top Tracks:
1. Are You Experienced?
2. Fire
3. Love or Confusion